The E-LINK Exercise Kit consists of Myo-EX and AngleX sensors that are exclusively designed for innovative biofeedback therapy.

Used in a wide variety of clinical settings, from hand therapy to stroke and neuro rehabilitation, the Exercise Kit gives direct biofeedback to the patient and is the ideal tool for undertaking progressive exercise throughout the rehabilitation process. 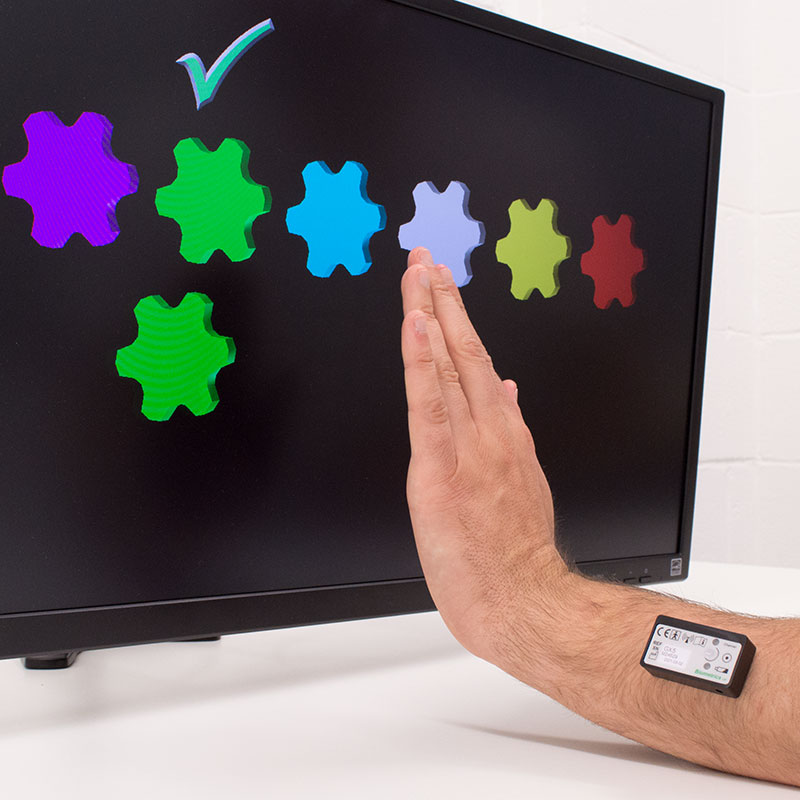 Myo-EX is a highly sensitive sensor using biofeedback for exercise, beginning from when there is the tiniest flicker of voluntary muscle activity, with or without visible joint movement. The sensor can be used throughout the full spectrum of muscular activity and rehabilitation, even to that of the professional athlete.

Myo-EX is extremely useful for tendon transfers and radial nerve injuries in hand therapy or for patients in the acute phase of stroke recovery.

The immediate visual feedback from the moving objects in the Activity helps the patient know when they are actually activating the muscle. Normal movement patterns are subsequently encouraged as the patient focuses on smooth, efficient and co-ordinated motor control in order to succeed in the activity. As the patient's attention is drawn to a normal movement pattern, unnecessary compensatory movements are thereby discouraged.

From the Therapist in a Community Hospital

"I would like to take this opportunity to tell you of one of our very satisfied users of E-LINK, in particular the Myo-EX. Mr S is a 22 year old who we saw following TBI. He was previously very fit and active. He utilized a wide base of support and flexed posture for stability in sitting and during mobility. He struggled to raise his eyes from the ground due to his posture. Cognitively he struggled with insight and awareness and had a very poor short term memory, therapy sessions had little carry over, particularly if the exercises were not in a functional context. However in functional activities his alignment and tone were far from ideal and he struggled with verbal or hands on direction to improve this mid task. He agreed to trial the E-LINK.

Our aim was to improve postural awareness and work on scapula setting. Within 10 minutes the visual feedback he received from the system enabled him to activate consistently and achieve both active pelvic tilt and scapula retraction. We moved forwards until we were using the Myo-EX on Posterior Deltoid alongside a light hand weight whilst seated on a gym ball. This contributed significantly towards narrowing his base of support when mobilizing. Most importantly to him he felt like he was 'exercising' rather than 'receiving therapy', a bit step towards him returning to the gym.

Not only this, due to the gradable nature of the E-LINK games we were able to address a variety of perceptual and cognitive skills, (most significantly for him, scanning and processing speed), without paper based exercises or therapy games, to which he objected.

He is not alone in benefiting from the Myo-EX for scapula setting. It remains our most successful method of raising awareness in scapula control, we can achieve more in 1 session than in several sessions using alternative methods." 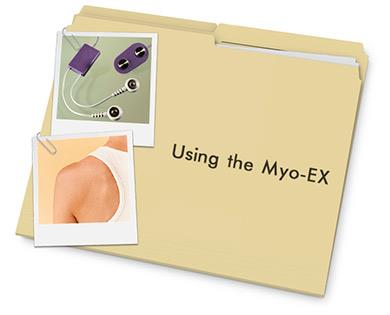 From the Clinical Specialist in a Major Stroke Rehabilitation Unit

"I have been using the Myo-EX with a young chap with an undefined neuropathy. He had a stroke in 2007, regained his function, but remained aphasic and only had the use of his left hand. After becoming severely ill in January this year, he lost the power in the remainder of his body and was completely dependent.

Recovery was minimal, and work between February and May saw an improvement in his left shoulder and elbow with a very slight wrist improvement. However, after one session with the Myo-EX, a significant improvement was visible and he was very pleased. He was able to stabilize his wrist to a greater degree than anytime previous. Now, strength rarely appears miraculously, and what I think happened is that the Myo-EX taught him to find and isolate the movement in one session, and made him stop recruiting unnecessary movements of shoulder and wrist. It was a great result in a very short space of time and we continue the sessions." 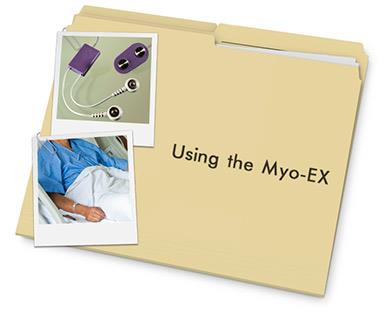 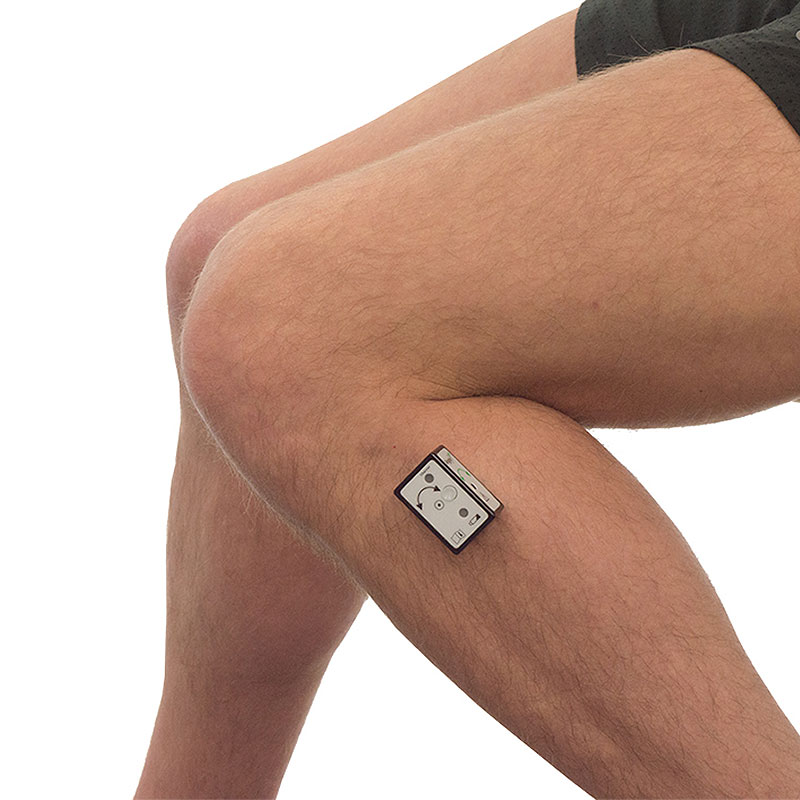 Where there is active joint movement, AngleX encourages focused exercise against gravity for small DIP joints through to the larger joints of the upper and lower extremities.

AngleX is very beneficial for a variety of clinical areas needing a tool for focused exercise - from hand therapy clinics to Stoke, Neuro and Spinal Injury Units.

From the Clinician in a Hospital Hand Therapy Unit

“This lady developed a neuropathy while pregnant after having Swine Flu. Her baby was delivered while she was in a coma for a further month. At first she was without any movement on the left side. On our last assessment she had 100% ROM and 90% strength.”

“To the occupational therapy team - I would like to say thank you all in the part you have played in my recovery. I am the first to admit that when I first heard of occupational therapy and the Biometrics Ltd machine I was wondering how it would work. Now I want to shout to the whole world about how much I have improved. I put my movement improvement largely down to the Biometrics Ltd program I have been on and the way the occupational therapists have guided me through each week even if I was scared to start with. Thank you all again for helping me to improve my movement and help me lead an almost normal life and most of all be a mother to my baby.” 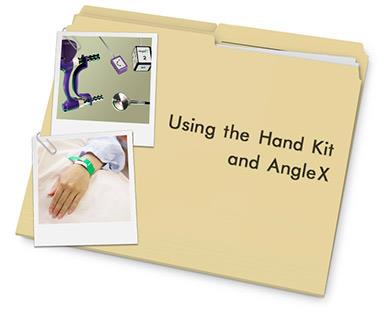 From the Clinician in a Hospital Hand Therapy Unit

“We have been seeing a man with CIDP (Chronic Inflammatory Demyelinating Polyneuropathy). The treatment this man receives is infusions of immunoglobulin which involves hospital admission for 3-5 days to complete every few weeks.

Using E-LINK, the occupational therapists have managed to track the peaks and lows in strength and agility pre and post these infusions. The patient uses this data with his consultant in order to judge dosage and or frequency of treatment correctly. The patient has found this very valuable for the past 3 years.” 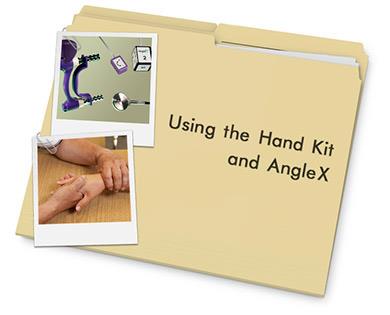 Activities can be graded for speed and difficulty. This allows a graduating course of therapy for each patient. The interactive Activities engage the patient in the process, provide motivation and feedback and eliminate the boredom associated with repetitive exercise.

The versatility of the Activities addresses a wide range of physical and cognitive needs. From simple end range to end range, gross motor activities to various type of matching and sequencing of objects to complex spatial relationships requiring fine motor control. 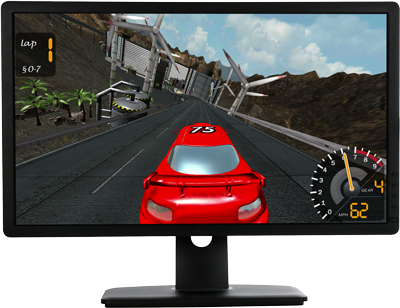 Activities can be graded for speed and difficulty. This allows a graduating course of therapy for each patient. The interactive Activities engage the patient in the process, provide motivation and feedback and eliminate the boredom associated with repetitive exercise.

The versatility of the Activities addresses a wide range of physical and cognitive needs. From simple end range to end range, gross motor activities to various type of matching and sequencing of objects to complex spatial relationships requiring fine motor control.

The Exercise Kit is available as a wireless or wired connection to a computer.